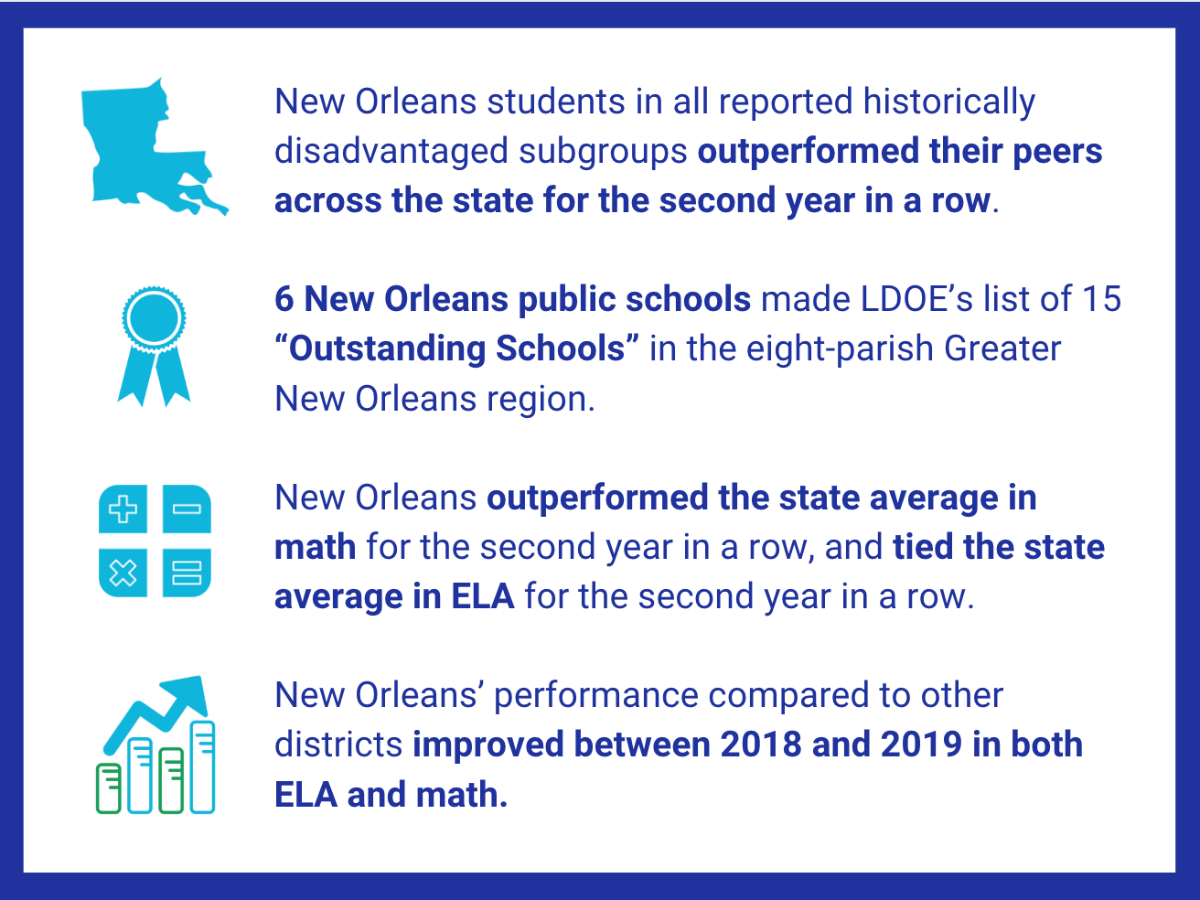 The Louisiana Department of Education (LDOE) has released “top growth” results for K-8 and high schools in the 2018-19 school year. These results are a measure of student growth, or student progress, meaning students’ improvement from one year to the next on state LEAP assessments. Top growth results complement the LEAP student achievement results released last month, together providing a more complete picture of student learning.

Growth is a critical aspect of both student outcomes and school quality; students begin each school year at all different levels, and while meeting an absolute bar is important, so is making significant progress toward that goal. To reflect this, student progress is included as a component of School Performance Scores for both K-8 and high schools. 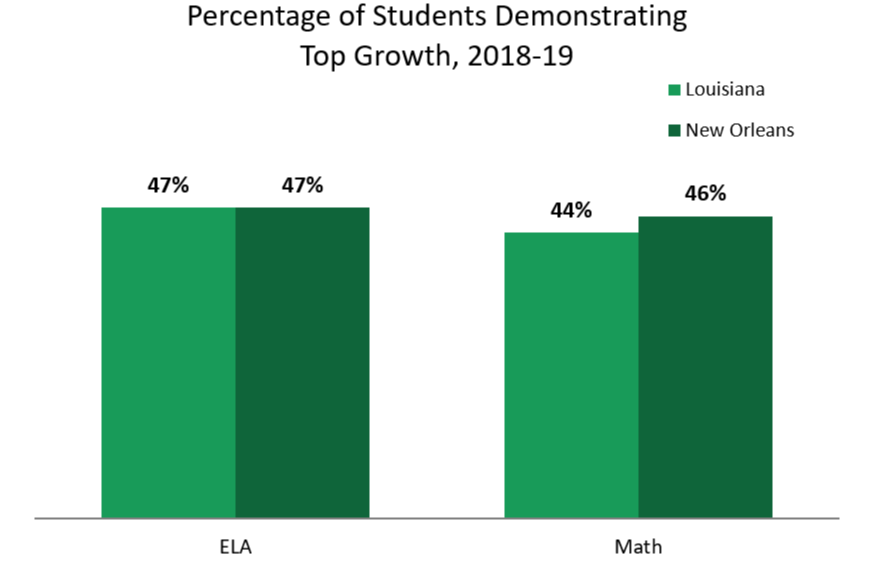 For the second year in a row, New Orleans outperformed the state top growth average for all four historically disadvantaged subgroups reported on by LDOE: Black students, economically disadvantaged students, students with disabilities, and English Language Learners. A larger percentage of New Orleans students in each of these groups demonstrated top growth in ELA and math combined compared to their peers across the state. 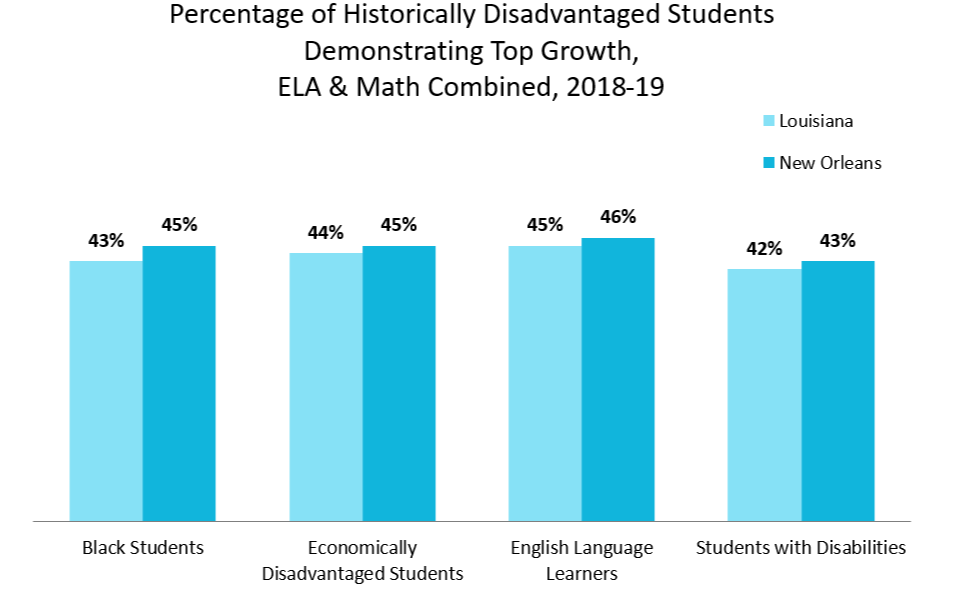 CELEBRATING SUCCESS ACROSS THE CITY

Congratulations to the following “Outstanding Schools” in New Orleans! In each of 8 regions across the state, LDOE recognized the 15 schools with the highest percentage of students demonstrating top growth in ELA and math combined. Of the 15 Outstanding Schools in the eight-parish Greater New Orleans region, more than a third are New Orleans public schools.

Between 2017-18 and 2018-19, the majority of New Orleans schools increased the percentage of their students demonstrating top growth in ELA, math, or both subjects. Several schools stood out for significant improvement. Congratulations to the following three schools with the highest increases in both ELA and math!

Bricolage Academy, a PK-6 open-enrollment school growing to 12th grade, showed the largest increase in both ELA and math out of all New Orleans public schools. We spoke to CEO Josh Densen for his reflections: 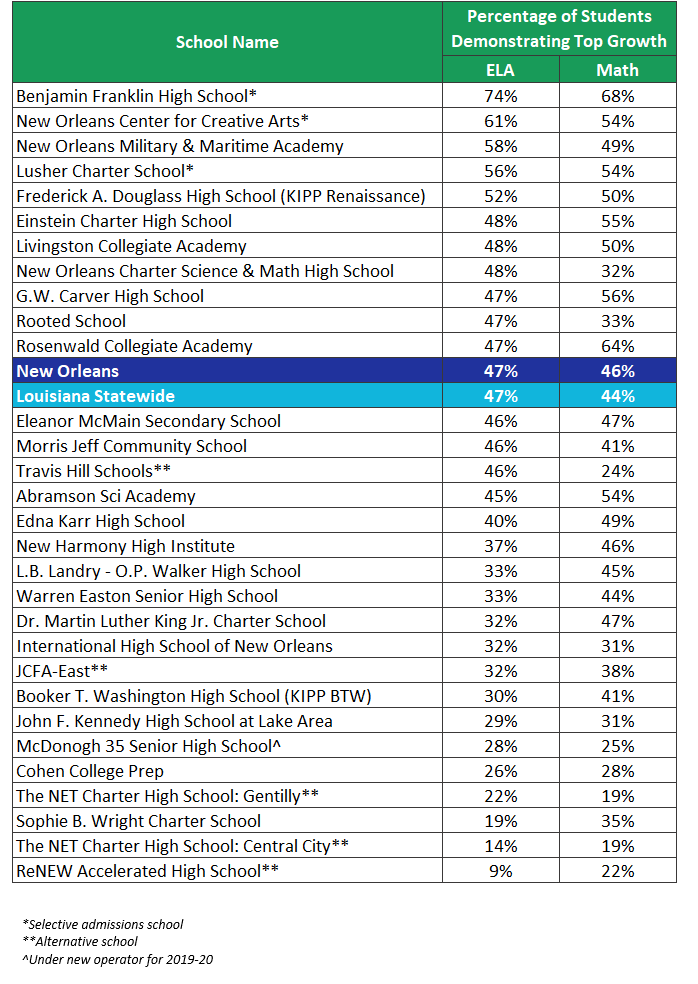 While great schools help students meet an absolute, rigorous bar of success, they also strive for significant growth for each child, year after year. We need to give schools credit for bringing students forward, even if those students come to them academically far behind. As a state and a city, it is important that we measure both proficiency and growth, honoring the progress toward goals and the milestones of meeting them.

For more information, please refer to the Louisiana Department of Education’s press releaseas well as the following downloadable data files: